A pregnant teenager flees life with her drug-addicted mother and ends up living on the street before being welcomed into her first real home in Gimme Shelter, an extraordinary tale of survival and redemption inspired by actual events. For 16-year-old Agnes "Apple" Bailey (Vanessa Hudgens), life has been a constant struggle to overcome the harsh reality of a subsistence existence with her abusive mother, June (Rosario Dawson), and June's string of lowlife boyfriends. When she finds herself pregnant and alone, Apple temporarily takes shelter with her biological father, Tom (Brendan Fraser), a wealthy Wall Streeter living in a New Jersey mansion with his wife Joanna (Stephanie Szostak) and two young children. But Apple's inability to adjust to her new circumstances, and her refusal to terminate her pregnancy, soon force her back onto the streets. Desperate to find a haven for herself and her unborn child, Apple reluctantly agrees to move into a suburban shelter that houses other pregnant teens. Emotionally scarred and unable to trust those who want to help her, it seems unlikely that Apple will be able to adapt to the shelter's strict rules and high expectations. With her safety and that of her unborn child at risk, Apple must find a way to break the shackles of her unhappy past and embrace the future with clarity, maturity and hope. Inspired by the real-life, David-and-Goliath story of Several Sources Shelters founder Kathy DiFiore, award-winning writer and director Ronald Krauss wrote his original screenplay while spending a year in a shelter for pregnant teens, and based his poignant screenplay on the lives of several of the shelter mothers. Gimme Shelter stars Vanessa Hudgens (High School Musical franchise, Machete Kills), Rosario Dawson (Sin City, Trance), Brendan Fraser (Crash, The Mummy), James Earl Jones (The Great White Hope, Star Wars franchise), Ann Dowd (Compliance, Side Effects) and Dascha Polanco ("Orange is the New Black"). Also appearing in the film are several real life shelter mothers, their babies and Kathy DiFiore. The film is produced by Krauss and Jeff Rice (End of Watch, 2 Guns). Director of photography is Alain Marcoen (The Kid with a Bike, She is Not Crying, She is Singing). Production designer is William Ladd Skinner (This is the End, Pirates of the Caribbean franchise). Costume designer is Ciera Wells (All is Bright, Damsels in Distress). Executive producers are Paul Hellerman (Pulp Fiction, The Mexican) and Scott Steindorff (The Lincoln Lawyer, The Human Stain). 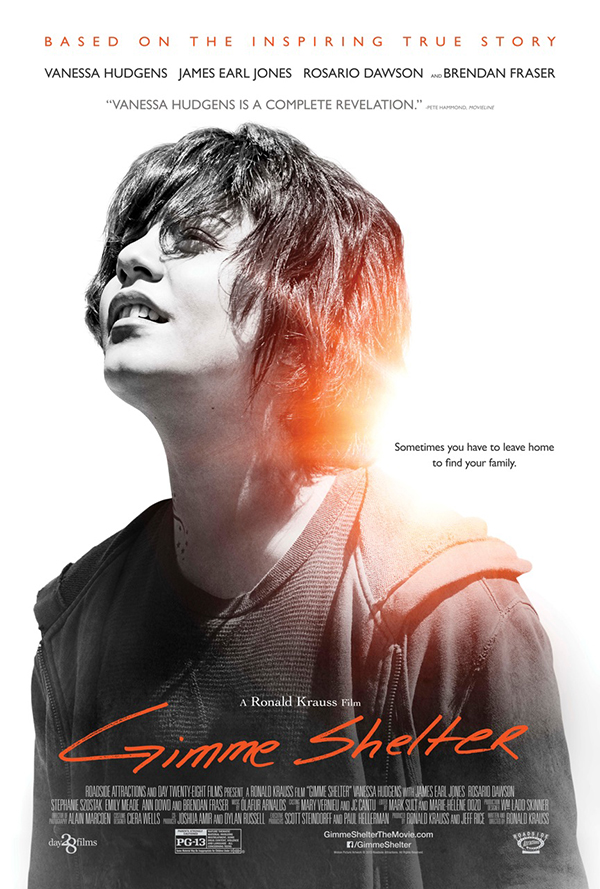